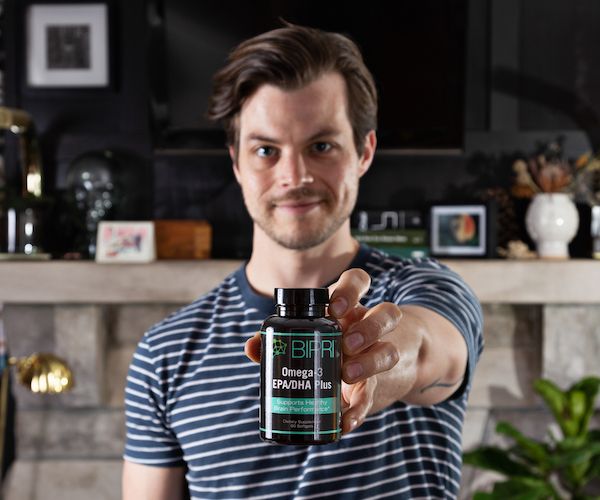 By now, you have likely seen some amount of research backing up Omega-3 fish oil as being beneficial to the growth and development of the brain. Whether you and your children are receiving Omega-3 from natural food sources or supplements, there is a sea of research that ensures that these benefits certainly hold true. In this article, we take a look at some of the benefits that omega-3 fatty acids can provide, and link to the research that supports those claims.

Omega-3s are fatty acids that are essential to our health. Your body does not naturally produce these acids, they are a nutrient that we must draw from food and supplements. Foods rich in Omega-3 include fish, flax seed, and walnuts.

There are three main types of omega-3s. Eicosapentaenoic acid (EPA) and docosahexaenoic acid (DHA) are found in fatty fish and fish oil. Alpha-linolenic acid (ALA) is mostly found in plants, and when consumed, the body converts a portion of ALA into EPA or DHA. The formulas used in brain supplements at BIPRI provide concentrated levels of DHA and EPA.

Below are some of the benefits that the omega-3 supplements we supply and other sources of fish oil can provide to the brain.

Low levels of omega-3 in the body can actually accelerate brain aging, as they are vital to the development of different areas of the brain. However, when taken in the early stages of brain function decline, studies have shown that omega-3 oils can improve information retention and decrease memory loss.

A double-blind placebo-controlled study was conducted in 2008 over the course of 24 weeks to determine the feasibility of omega-3 fish oils improving brain function. The findings were that memory was improved in a test group with mild cognitive impairment (MCI), or those in early stages of memory loss. The same tests were run on a test group with Alzheimer’s diseases, in which no correlation between fatty acids and memory retention was found.

While it would be excellent to find a supplement that could benefit people with Alzherimer’s, it is certainly encouraging to know that the regular use of fish oil supplements and foods can help improve memory loss in less severe stages of dementia, and that omega-3 may be one of the best supplements available for memory and concentration.

Omega-3s are also critical in the early stages of life, even before a baby is born. During pregnancy and infancy, it has been shown that children who are breast-fed by mothers with a steady supply of omega-3 in their diet performed better on a mental processing test at age 4 than those who were fed a formula lacking in omega-3 during that same time.

DHA is also important to the development of eyesight in newborns, and can even lead to fewer behavioral problems and better social skills as a child ages.

Reducing Symptoms of ADHD in Children

There are many options for addressing ADHD in children, but more and more parents have been turning to omega-3 supplements for their kids due to its success.

Several studies that have linked lower levels of EPA, DHA, and ALA in the blood to children with ADHD. By implementing omega-3 into a child’s diet at an early age, parents can help reduce the symptoms of ADHD in their children. Because ADHD is a largely genetic disorder, fish-oil supplements cannot entirely prevent it from occurring, but they have been proven to provide increased focus in children.

However, low levels of omega-3 is not a symptom of every child who experiences ADHD, so what may work as a solution for some may not work for others. This is where a more comprehensive package, such as our Kids Focus and Attention bundle, can do a great job of addressing different areas of mental and physical health. This bundle features brain boosting multivitamins, chewable probiotics to promote gut health, as well as the EPA/DHA omega-3 chewable.

Improved Sleep in Adults and Children

Low levels of omega-3 have also been linked to poor sleep in people of all ages. In a 16 week study of kids ages 7-9, researchers found that a group taking an omega-3 supplement had on average seven fewer wake up episodes and 58 more minutes of sleep per night than the control group! In adults, DHA was also found to have an inverse relationship with obstructive sleep apnea.

This may be in part because low levels of DHA are also correlated to low levels of melatonin, which is a hormone that helps people fall asleep. Orderly membrane fatty acid patterns play a key role in helping us relax and focus, and the lack of omega-3 can have detrimental impacts on those patterns over time. If you are interested in improving your sleep patterns, one of the first places to start should either be eating more fish, or finding an omega-3 supplement that you like!

If you experience depression or anxiety, you are not alone. It is estimated that nearly 7% of the US population has at least one major depressive episode every year.

In a time where mental health awareness is of the utmost importance, it is certainly a good idea to explore new ways that you can fight depressive and anxious feelings that you may be feeling for any number of reasons.

Many preliminary studies have shown that depression has been linked in some cases to low dietary levels of fatty acids. While these studies are fairly recent and conclude that the data is not entirely consistent yet, researchers found that in many cases, omega-3 dietary supplements not only prevented depression, but also decreased depressive symptoms in some users.

It is clear to see that there is hard evidence backing several of the major health benefits that omega-3 fatty acids can provide. Many of these benefits are only recent findings, and more and more research on omega-3 and the brain is being conducted every year.

For many of us, oily fish, flax seed, and walnuts are not a regular part of our diet, and this is where a supplement could come into play. We invite you to further explore our line of brain performance supplements, including our Optimal Brain Health bundle for adults, which features DHA-rich omega-3 supplements. Our site also has many other great resources concerning cognitive enhancers and ways to improve memory!