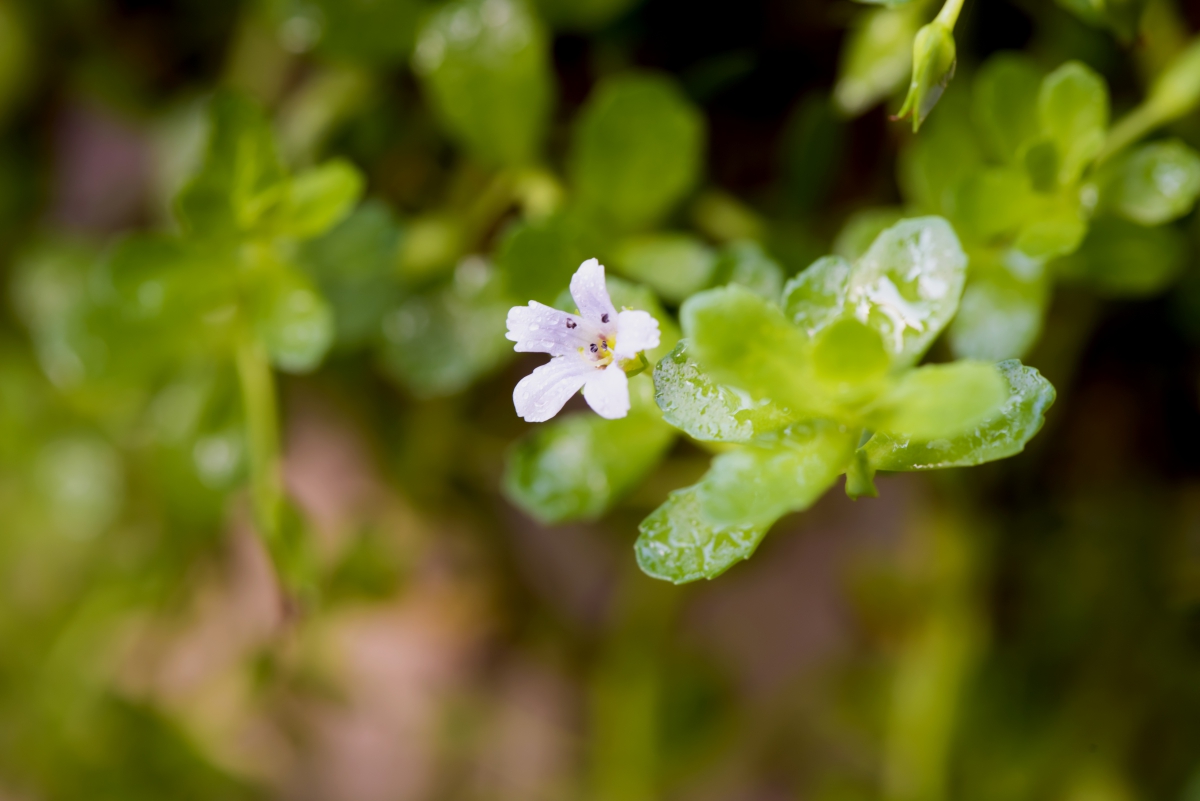 In our last blog post, we discussed how beets and beetroot powder may be able to combat the progression of dementia. In today’s post, we continue our series on some of the most exciting, all-natural ingredients in BIPRI’s brain health products by focusing on bacopa monnieri, which can be found in our Brain & Memory Fuel and Relaxed Brain supplements. Bacopa has been shown in several studies to have a beneficial impact on cognition and may even improve memory formation. Read on to learn more about the fascinating history of this herb, then browse the BIPRI Store for even more brain-boosting tools, programs, food, and supplements for adults and children.

Bacopa monnieri, often referred to simply as bacopa, is a perennial creeping herb that is indigenous to the wetlands of Southern and Eastern India, Australia, Europe, Africa, Asia, and North and South America. Other common names include water hyssop, Brahmi, thyme-leafed gratiola, herb of grace, and Indian pennywort. Bacopa is a non-aromatic herb featuring succulent, oblong leaves and small, star-shaped, white flowers with four to five petals each. Bacopa commonly grows in marshy and brackish areas throughout India, Nepal, Sri Lanka, China, Pakistina, Taiwan, Vietnam, tropical and Southern Africa, Madagascar, Australia, and the Caribbean. It can also be found in the United States within Florida, Texas, and Hawaii.

Bacopa monnieri has been used throughout history as a form of aboriginal medicine nearly everywhere it grows, but particularly in India and South Asia. Within India, traditional medicine is referred to as Ayurveda, and it dates back more than two millennia. The term “Ayurveda” is a combination of the Sanskrit words ayur (meaning “life”) and veda (meaning “knowledge”). According to classical texts, Ayurveda began with the transmission of medical knowledge from the gods to the sages, and then to human physicians. Ayurveda is one of the oldest medicine systems in the world, it is still widely used throughout India and South Asia to this day.

Bacopa is considered so miraculous within Ayurveda that it was given the nickname Brahmi, after Brahma — considered the divine source or “cosmic consciousness” from which all things emanate. Traditional Ayurvedic practitioners use bacopa as a way to improve cognition and reduce cognitive impairments such as anxiety, ADHD, and even Alzheimer’s Disease. It has also been used in Hindu newborn baby rituals throughout the centuries out of the belief that it will open the child’s gateways to knowledge. Some people also use bacopa as a way to enhance their spiritual practice by improving their concentration and focus so that they can memorize extensive hymns and scriptures.

Bacopa as a Modern Nootropic

As word of the all-natural, cognitive-enhancing powers of bacopa spread throughout the West, more and more people wanted to try this unique herb for themselves. Today, it is commonly acknowledged as a nootropic, which is a type of supplement that can enhance brain functions such as memory, learning abilities, and concentration. Various studies have shown that bacopa monnieri is able to “improve specific domains of cognition, sensitive to age associated cognitive decline (particularly processing speed and memory)” and could “theoretically enhance and strengthen synaptic changes acquired through cognitive training” (McPhee GM, et al, 2016). Bacopa has also been shown to limit inflammation in the CNS (central nervous system) and offers a promising source of novel therapeutics for the treatment of many CNS disorders. Additionally, studies have pointed to “the safe use of Bacopa monnieri in child and adolescent populations for improving elements of cognition as well as behaviour and attention-deficit domains” (Kean JD, et al, 2016).

Whether you’re an older adult looking to slow the progression of cognitive decline or you’re a parent in search of a supplement that may be able to help ease the symptoms of your child’s attention deficiency, BIPRI can help. Our Brain & Memory Fuel and Relaxed Brain supplements feature all-natural ingredients, such as bacopa monnieria, that have been shown in scientific studies to have cognitive-enhancing benefits. So, what are you waiting for? Experience the brain-boosting power of BIPRI supplements, programs, and tools for yourself by browsing the BIPRI Brain Store now. 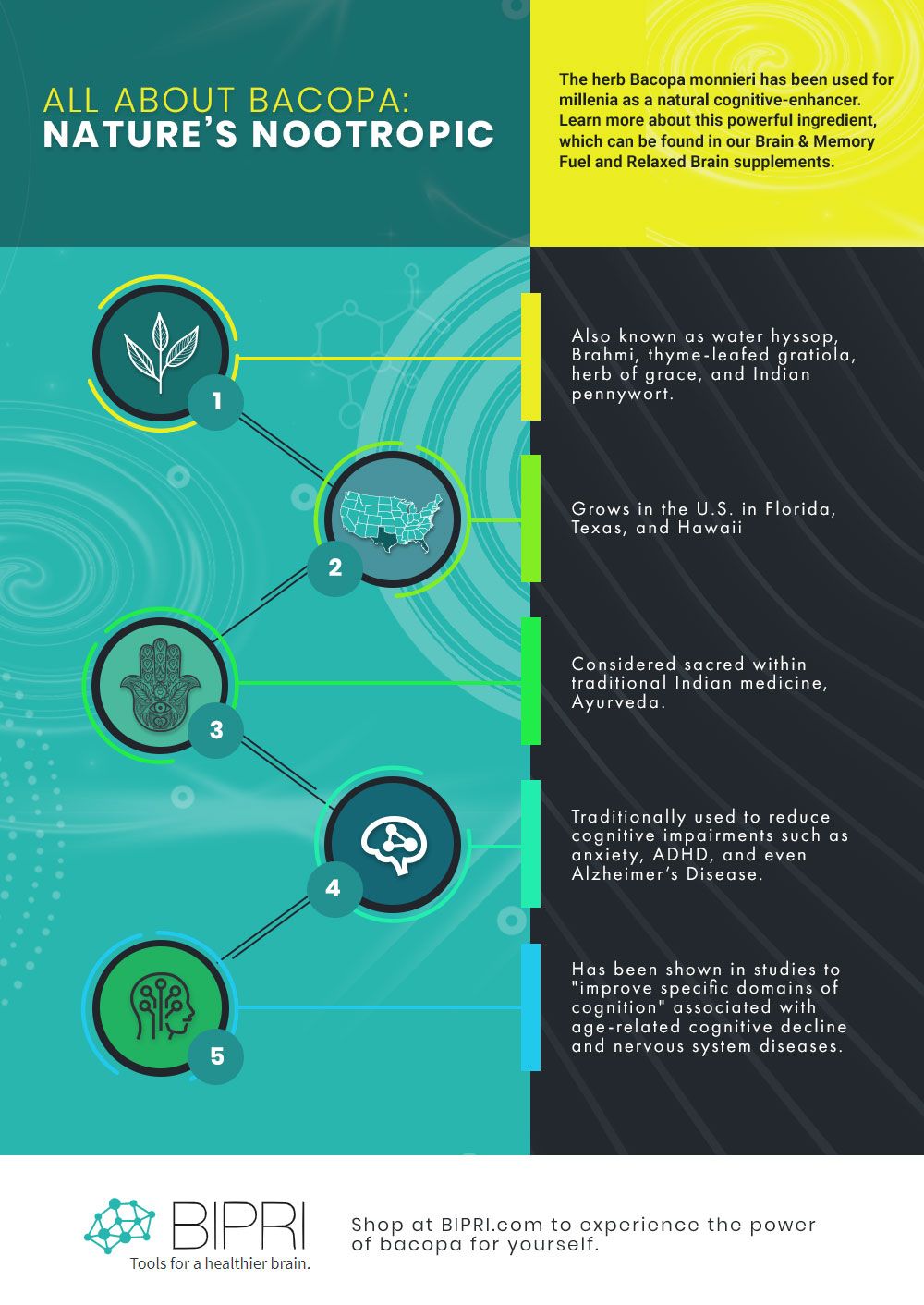